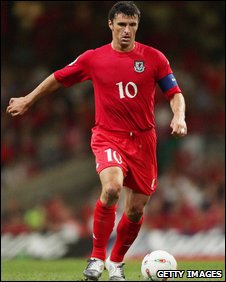 It has been confirmed that Gary Speed was found dead this morning. He was found hung in his own home. He was only 42 years old.

Gary Speed was a model professional and one of those rare characters that seemed to be respected by everyone because he conducted himself with such decorum throughout his long and distinguished career.

I saw him play a few times live against us and what stood out for me was his total commitment, his never say die attitude and his refusal to give up. He will be remembered as a great footballing professional.

Rest in Peace Gary Speed. It is times like this that we should all realise that there are many things much more important than football and now is a time where we should all rise above any tribal rivalries. Our thoughts and best wishes go out to Gary's family and close friends.
Posted by 1979gooner at 13:18

R.I.P our thoughts and prayers go out to your family and loved ones

RIP Mr Speed my heart goes to the Welsh, friends and family too, sad for football.

Where do you get the fact that he was found HUNG from? I have not seen that reported anywhere else.

Telegraph reporting this, apparently with families permission! sad loss for football my thoughts are also with Arron Ramsey ~ Speed handed him the captain's armband a sign of his trust in our young gunner RIP a football good guy

R.I.P Speed may your soul rest in perfect peace.

Terrible news. Thoughts are with him and the family.

The demise of Gary Speed is a big blow to many football fans. Speed will be missed dearly for sure. Read more about Gary Speed Death here.

As an American my introduction to world football came late, but just in the last week I'd seen interviews with Speed in both FourFourTwo and Backpass magazines, and FFT also had Ramsey speaking well of Speed, saying he'd changed things for the better with the Wales NT.

It seems very fishy, what with those interviews, and the last TV interview of him which I downloaded, giving no indication that anything was wrong. There may be more to this, perhaps a red flag that no one saw -- as with a sports suicide over here this year, Baltimore Orioles pitcher turned chief scout Mike Flanagan. The police say there was no foul play, but I wonder.